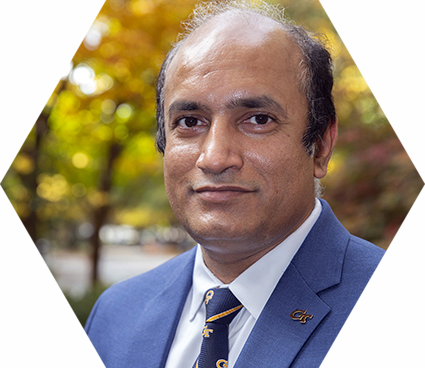 Devesh Ranjan was named the Eugene C. Gwaltney, Jr. School Chair in the Woodruff School of Mechanical Engineering at Georgia Tech and took over the role on January 1, 2022. He previously served as the Associate Chair for Research, and Ring Family Chair in the Woodruff School. He also holds a courtesy appointment in the Daniel Guggenheim School of Aerospace Engineering and serves as a co-director of the $100M Department of Defense-funded University Consortium for Applied Hypersonics (UCAH). At Georgia Tech, Ranjan has held several leadership positions including chairing ME’s Fluid Mechanics Research Area Group (2017 - 2018), serving as ME’s Associate Chair for Research (2019-present), and as co-chair of the “Hypersonics as a System” task-force, and serving as Interim Vice-President for Interdisciplinary Research (Feb 2021-June 2021).

Ranjan joined the faculty at Georgia Tech in 2014. Before coming to Georgia Tech, he was a director’s research fellow at Los Alamos National Laboratory (2008) and Morris E. Foster Assistant Professor in the Mechanical Engineering department at Texas A&M University (2009-2014). He earned a bachelor's degree from the NIT-Trichy (India) in 2003, and master's and Ph.D. degrees from the UW-Madison in 2005 and 2007 respectively, all in mechanical engineering.

Ranjan’s research focuses on the interdisciplinary area of power conversion, complex fluid flows involving shock and hydrodynamic instabilities, and the turbulent mixing of materials in extreme conditions, such as supersonic and hypersonic flows. Ranjan is a Fellow of the American Society of Mechanical Engineers (ASME), and has received numerous awards for his scientific contributions, including the DOE-Early Career Award (first GT recipient), the NSF CAREER Award, and the US AFOSR Young Investigator award. He was also named the J. Erskine Love Jr. Faculty Fellow in 2015. He was invited to participate in the National Academy of Engineering’s 2016 US Frontiers in Engineering Symposium. For his educational efforts and mentorship activity, he has received CATERPILLAR Teaching Excellence Award from College of Engineering at Texas A&M, as well as 2013 TAMU ASME Professor Mentorship Award from TAMU student chapter of the ASME. At Georgia Tech, Ranjan served as a Provost’s Teaching and Learning Fellow (PTLF) from 2018-2020, and was named 2021 Governor’s Teaching Fellow. He was also named Diversity, Equity and Inclusion (DEI) Fellow for 2020-21.

Ranjan is currently part of a 10-member Technical Screening Committee of the NAE’s COVID-19 Call for Engineering Action taskforce, an initiative to help fight the coronavirus pandemic. He currently serves on the Editorial Board of Shock Waves and was a former Associate Editor for the ASME Journal of Fluids Engineering.