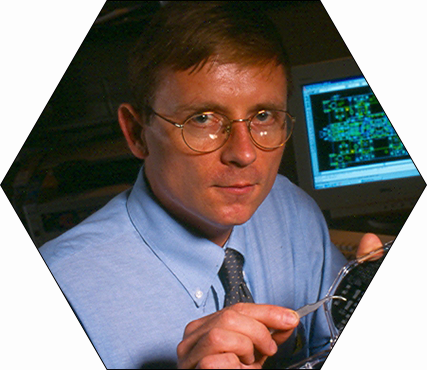 Began at Tech in Spring 2000 as a Professor. Prior, he was Associate Professor at the University of Illinois at Chicago

Dr. Hesketh's research interests are in Sensors and Micro/Nano-electro-mechanical Systems (MEMS/NEMS).  Many sensors are built by micro/nanofabrication techniques and this provides a host of advantages including lower power consumption, small size and light weight.  The issue of manipulation of the sample in addition to introduce it to the chemical sensor array is often achieved with microfluidics technology.  Combining photolithographic processes to define three-dimensional structures can accomplish the necessary fluid handling, mixing, and separation through chromatography.  For example, demonstration of miniature gas chromatography (Figure 1) and liquid chromatography with micromachined separation columns demonstrates how miniaturization of chemical analytical methods reduces the separation time so that it is short enough, to consider the measurement equivalent to "read-time" sensing.

Microvalves are key components in miniature fluidic systems. The use of MEMS actuation for active control of microvalves for directing fluid routing is an important application where the proper scaling of the actuator helps improve the fluid control. It also minimizes the dead volume, decreases power consumption, and increases the speed of analysis. The bidirectional microvalve mechanism we have developed is based upon the interaction between a CoNiMnP magnet, gold microcoil, and soft magnetic (NiFe) base. The microactuator is entirely fabricated by surface micromachining on top of a single silicon wafer. The overall diameter of the microactuator is 1,600 μm. The overall height is approximately 600 μm, including the thickness of the silicon wafer. An operational current and power of 13.9 mA and 1.39 mW respectively, provide the latching mechanism with a membrane maximum displacement of 29 μm.

Microcantilever sensors are exquisitely sensitive platforms for chemical and biosensing.  They have been studied for a diverse range of applications from environmental monitoring to specific bioassays. Our interest is in developing a fundamental understanding of the mechanisms involved in generating the surface stress induced bending of the cantilever due to molecular adsorption. One of the advantages of microcantilevers is the simple instrumentation required and low power requirements.  Current devices shown in Figure 2, operate with a current of 200uA, which makes it feasible to power arrays of sensors with a small battery.  The surface of the sensor is coated with gold or a metal organic framework films to provide a selective chemical adsorption. In addition, this measurement platform has a low thermal mass, short thermal time constant allowing rapid heating and desorption therefore cleaning of the sensor surface for reuse.

A second focus area is biosensing. Professor Hesketh has worked on a number of biomedical sensors projects, including microdialysis for subcutaneous sampling, glucose sensors, and DNA sensors.  Magnetic beads are being investigated as a means to transport and concentrate a target at a biosensor interface in a microfluidic format, in collaboration with scientists at the CDC.  One example is a sandwich assay for the cytokines IL4 and IL8 that utilizes paramagnetic beads, 1um in diameter, labeled with the enzyme, βgalactosidase. The approach is to create localized magnetic field gradients in order to trap the beads at an interdigitated electrode sensor.  Hence, the electroactive enzyme product is more effectively concentrated, there by increasing the sensitivity of the assay.

His research interests also include nanosensors, nanowire assembly by dielectrophoresis; impedance based sensors, miniature magnetic actuators; use of stereolithography for sensor packaging. He has published over sixty papers and edited fifteen books on microsensor systems.

Operation of a microvalve