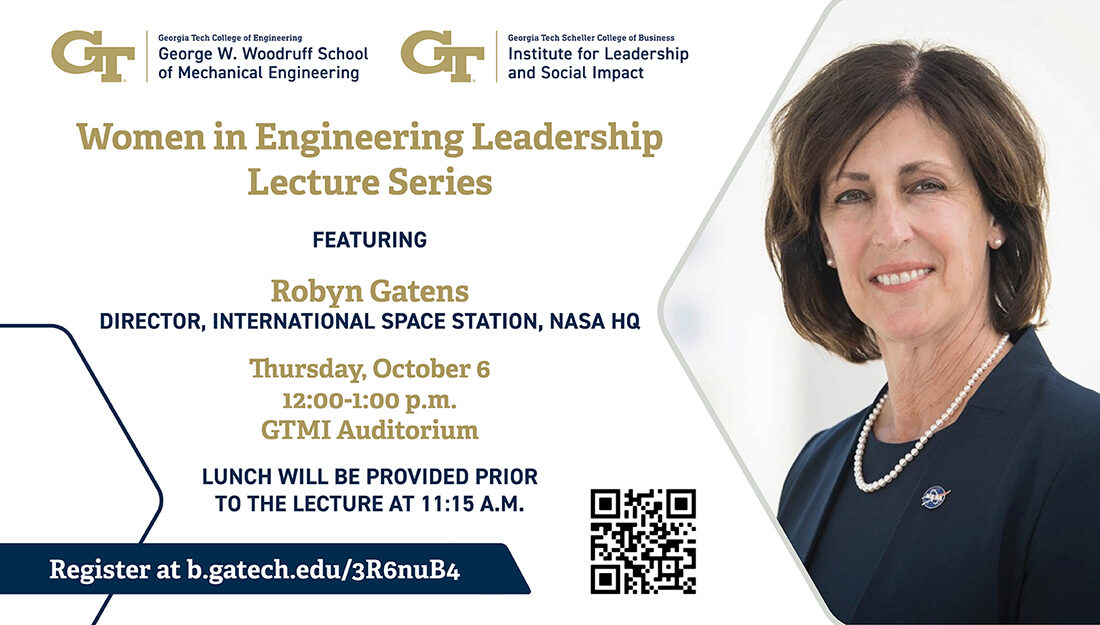 The George W. Woodruff School of Mechanical Engineering, in conjunction with the Institute for Leadership and Social Impact and Georgia Tech’s ADVANCE Program, will host Robyn Gatens as the inaugural speaker for the newly established Women in Engineering Leadership Lecture Series. The event will take place on Thursday, October 6, from 12-1 p.m. in the GTMI Auditorium and is open to the entire Georgia Tech community.

Gatens, the director of the International Space Station (ISS) in the Human Exploration and Operations mission directorate at NASA Headquarters, will deliver a talk focused on her career journey and the lessons she has learned along the way. She will also discuss the wide variety of career opportunities and disciplines in the space industry, and the efforts being made by NASA and the ISS to encourage more students from underrepresented groups in STEM to pursue careers in engineering.

As ISS director, Gatens leads strategy, policy, integration, and stakeholder engagement for the space station program at the agency level, including the use of the station for research and technology demonstrations including to support NASA’s Artemis missions, and activities to secure an ongoing U.S. presence in low-Earth orbit (LEO) by enabling a successful, long-term private sector commercial LEO space economy.

The Women in Engineering Leadership Lecture Series was established earlier this year by Devesh Ranjan, Eugene C. Gwaltney, Jr. School Chair, and the Women of Woodruff (WoW), to give members of the Georgia Tech community the opportunity to network with talented female scholars and innovators in the field of engineering. Each semester, the Woodruff School will host talks featuring notable women engineers who are creating a better future for our community — locally, nationally, and globally. Additional speakers for the 2022-23 academic year will be announced in the near future.

Gatens is also an agency senior expert for environmental control and life support (ECLSS) and crew health and performance systems and serves as NASA’s liaison to the ISS National Laboratory. In her 37 years at NASA, she has led the development and management of life support and habitation systems for human spaceflight missions. She has also led agency strategic and budget planning to mature these habitation system technologies needed for future deep space exploration missions, using the ISS as a demonstration testbed. Gatens began her NASA career in 1985 at the Marshall Space Flight Center in Huntsville, Alabama, is the recipient of NASA’s Outstanding Leadership and Exceptional Achievement Medals, and holds a Bachelor of Chemical Engineering degree from Georgia Tech.

Click here to register for the lecture. A Q&A will immediately follow and lunch will be served prior to the talk beginning at 11:15 a.m. No food or drink will be allowed in the GTMI Auditorium.